To the demoscene.  (you know who you are; read our scroller texts if you like things personal!)  My crews disasterarea  and Elix.

This is a long list.  CD and Vinal covers are not common place these days so it’s hard to know where to thank people – and so I’m doing it here.  As a musician you realiize that 100’s of people are  behind you on every tour / show / release  (and continue to be!).  If I’ve missed you, drop me a hello and I’ll add you on.

To my Visualists and Lazer ops that have provided my backdrops!!  <3  Chronic Sans, m7Kenji, Aday, Batsly Adams, nontendo, The Cmen, Enzo, Jake, NO CARRIER, Dimitri,  Dot.AY, Jason Haebich, iLKke and more.  Everyone who’s ever been to a chipshow knows that the visuals are as important as the music.

My family – because as a kid I didn’t ask for transformers and matchbox cars for my birthday.  From age 3 onward I begged for multitrack tape decks, software, sound modules,  guitars, drumming hardware, keyboards, effects units, amps, and computer upgrades…  Kudos to my folks for getting a C64 when I was 3 and then giving me a soldering iron age 8 and helping me build countless amplifiers, mixer kits, speaker boxes, studio desks and DIY cables.  I’m still using the stereo 200watt (real RMS!) Jaycar kit amp in my studio to this day; built in our shed in the 90’s!

To the locals here in AU: Soundbytes crew (esp. Eugene, Kristy, Alex, Aday), PAX Crew, Synchronicity party crew, LWP crew, gibbo, Unstable crew, the Hard Kandy guys, Bee, Rainbow serpent crew and all the other party crews that have had me play at their events over the years.  It’s nice to get my tunes in front of a “random crowd” who knows nothing and watch them flip.  A huge local scene of musicians help support me including Dennis Karland, Tiasu, pselodux, Maddest Kings Alive, Peaches, little-scale, 10k, Dot.AY, Biko, anakiRob, ALIH, abbochan, calavera, slato and pretty much everyone who’s ever played a Soundbytes or Square Sounds.  Thanks to the friends here and interstate who have encouraged me to keep making tunes esp. Josie, Kate, Lisa, Fabio and Scotty.   The staff at The Espy where we’ve held Square Sounds, Forgotten Worlds and Store DJ.  Greets to all the Aussie demoscene crew and the Defame biatches up in Sydney.

The NZ peeps: Blink, Disaster Radio, Old Grey Wolf, Zoe and Lisa.  And to all of you awesome CALH peeps: we shall meet again one day!

Meanwhile in Mexico: My pro “limo driver” Alonso, Luis, Juan, Daniel, Yanely and the rest of you (I have the signed poster on my wall at home) – what a time that was.  You all give Mexico City a great name!

The EU guys have been pretty pivotal – especially because so much of the demoscene is based in Europe.  That’s my roots – you can watch various demos for your greets 😉  Tobias of Evoke demoparty especially for the best ever drunk advice of “organise the party and they will come” while gesturing to the hall of partygoers from the balconies of Evoke 2006.  This has been my motto for organising events ever since!  Huge thanks to the various party organisers who keep offering me the privilege of playing their demoparties.  I will try and get around the various parties in the next few years!

Those mad Englishmen (and Englishwomen): CDK (brk), Adrain and the Superbyte team, Akira, Sabrepulse, Matt Nida, Harly, Mikey C, Henryhomesweet, Nina, Niamh, _ensnare_, Kairin, Paul H, and all the peeps who looked after me up in Scotland / Ayer.  There’s too many people to remember as touring is such a fast rush of chained together events.

A massive thankyou to my US crew – especially the people who have had me stay as a guest, leant me equipment and taken me around to see the sights.  Special thanks to Chiptography, Note, Natty, Knife City, Bitshifter, Facundo, Jen V, Nullsleep, Mike, glowmag, Carl, Zen Albatross, Monique & Ben, Melinda & Johan, Garvey, Emilychiptune, Batsly Adams, Danimal Cannon, Exilefaker, Nina, Metoikos, Tink, Matt from Kitchbent and Anthony from nonfinate electronics.  And I’ve missed so many here!  Love ya all.

To everyone who has had me as a guest: Your couches, floors and beds are the reason I’ve been able to tour and discover the wonderful cities you all live in.  From trusting me with your equipment, to letting me mix in your studios, repairing my broken gear, taking time off to pick me up from airports, to inviting me to birthday parties, putting my washing on (while I’m asleep!) and being family on the road.  Likewise, my floor is yours.

To the people who have endured watching me make tunes and seen me go awol for days in the studio and disappear on tour for months – I think you hugely.  My whole uni crew, my housemates, my partners past and present, my business partner and clients…  I get away with a ton from you all.  Cheers!  Also the music labels I’m involved with: Bleep Street (Berlin) for keeping on my case to get A for Amiga finished!

The techs and engineers: Lee from Sunshine Recorder (studio owner) who rebuilt the whole patching system in his studio so I could mix from 2” tape without a computer.  Marcus (the mix engineer) who has taught me the importance of fresh ears, outboard mixing and how much 40 years of experience adds to a mix. Jim at Ascension audio and Tris at Now Hear This for auditioning my mixes and giving me feedback.

The coders!  I must thank my dev mates who have made the software and hardwareI use daily.  It’s a privilege to have met and befriended almost all of you… and subsequently played at your weddings, shared countless beers and supplied beta besting notes to!   Ferris (SNES), Johan (LSDJ), Abrasive (Drag’n’Derp), Segamusix (OpenMPT), little-scale (tons of stuff), Paul Slocum (Atari 2600 libs), Akira / hoffman (PT-1200), Marc (The Piggy), ALIH (TFX / C64), Jeffrey Lim (Impulse Tracker), Kriz (flash carts), Leonardo (DefleMask), gopher (4kLang), Justin Frankel (Reaper) and Karsten Obarski (Ultimate Soundtracker) and the various Protracker “revisors”.  Your code is far more stable than anything I use in the “professional” world and you’ve all (more than often) responded near instantly to my questions and requests.  Much Respect.  Gotta also put out greets to m’ democrews Elix, disaster area, 68KRUE and SPC Amiga crew.

The web and forum peeps : Trash80 for the WB site, Leigh @ Bandcamp (and BC in general) and all the admins past and present of chipmusic, 8bc, pouet, scene, aminet, axdf, ucollective, TCTD, GBA, chiptunes=win and more.  Important coms channels these.

Finally, to the people who support my music daily by listening to it:  from the guys on the BBS boards when I was a lil kid, right through to peeps who bought my cassettes in the late 90’s, CD’s in the 00’s and online music in the 10’s – I make tunes / projects so that people will hopefully enjoy them one day.  Sometimes it takes a couple of years for me to release stuff – and I thank you for your patience.  I’m extremely lucky to have you all as an bunch of extended friends, and it’s a constant reminder of why I make music. 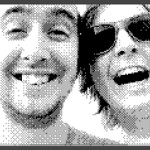